IT Network, IT Systems

In this article we will do the configuration backup for a list of Cisco router/switch devices with Python script using SSH secure protocol on Linux server running CentOS7.

In this tutorial, it is supposed that: 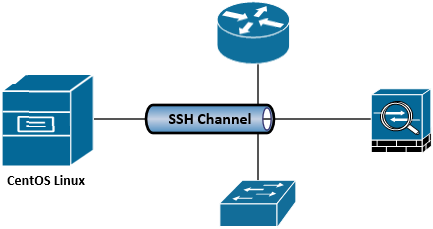 There are 2 files. One is the script file and another one is list of host to be backup by this script.You can create a directory any where and keep these 2 files together in the same directory. For our case now, let make directory /var/scripts/netbackup and keep this 2 files there.

In this script will backup router and switch configuration to directory /var/netbackup, so need to create this directory accordingly.

The script will do multiple devices backup from list of host in file cisco_routerswitch. So, we need to add Cisco router and switch hostname or IP address of remote SSH management into this file. Let use /etc/hosts to have a friendly name of backup file.

By default after installing CentOS7 Linux OS, Python version 2.7.5 should be installed there. We can verify with the following command.

To execute this Python script, we need to install the following Python module.

Now, we should be able to run this Python backup script, but need to make this script executable with the following command.

Let test run the script manually with the following commands.

Then we need to verify to make sure that the script can backup the Cisco router and switch configuration successfully.

That’s all about doing the configuration backup for a list of Cisco router/switch devices with Python script using SSH secure protocol on Linux server running CentOS7 from Tech Space KH. Hopefully, you can find this guide informative. If you have any questions or suggestions you can always leave your comments below. I will try all of my best to review and reply them.